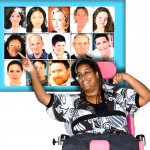 Community based studies have suggested that self injury in people with learning disabilities occurs in approximately 3% of adults living in community settings, show self-injury, often as a chronic condition for those with severe self injury.

For some individuals, protective devices have been used, including padding, helmets, gloves and arm splints.

In this case study, the participant was a 28-year-old woman with autism, bipolar disorder, static cerebral encephalopathy, moderate learning disabilities, hypotonia and musculoskeletal deformities. The woman had a history of biting herself mechanical restraints were applied when she bit, tried to bite herself or asked for them.

The researchers were interested in whether an establishing operation. offering the choice of which staff supported her, would impact on the need for mechanical restraints.

They found that when the woman was allowed to choose staff members, the use of mechanical restraint decreased.

They conclude that this may demonstrate that offering the choice of which staff support someone may be an establishing operation, and that there are

advantages of using alternating treatment designs to assess the effectiveness of treatment conditions for someone who exhibits long-term cyclic behaviour.