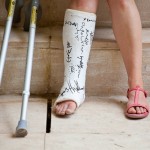 While most people would likely associate tricyclic antidepressants (TCAs) with more common adverse effects such as dry mouth, sedation and constipation, there is some evidence to suggest increased occurrence of bone fractures (Vestergaard, Rejnmark, & Mosekilde, 2006). However, the topic remains controversial and conflicting results about the association of TCAs and fracture risk abound (e.g. Ensrud et al., 2003).

In order to provide clinicians with a clearer picture of costs and benefits of TCA treatment, Wu et al. (2013) set about to aggregate relevant studies in a single meta-analysis that takes all relevant moderators into consideration.  In total, 12 publications met inclusion criteria, including five cohort and seven case-control studies. This study does not prove that taking tricyclic antidepressants causes bone fractures, but rather that there is a clear association

Because relative risks provide associative as opposed to causative information, it is impossible to claim TCAs directly lead to more fractures.

Likewise, the number of primary studies is very small and often heterogeneous, to say the least. This is especially cumbersome as most studies lack information on patients’ medical history and treatments that could affect bone composition, including some immunosuppressants or anti-seizure medication.

As TCAs seem to mostly increase risk of fracture by affecting postural stability, more information on previous falls etc. is necessary to arrive at more definite conclusions. Sadly, though, this information is rarely provided. This study is especially relevant to older people who take tricyclic antidepressants, as they are already at higher risk of falls

Wu et al. suggest usage of TCAs is associated with an increased relative risk of fractures compared to non-TCA treatment in the context of mood disorders, irrespective of bone characteristics.

Even though TCAs have largely been supplanted by safer drugs, such warnings should still be taken seriously, especially in already vulnerable populations, such as the elderly. As TCAs’ additional risks are most likely mediated by influences on circulation and blood pressure, drugs with similar cardiovascular side effects (e.g. atypical antipsychotics) should also be prescribed with care.

Interestingly, there is evidence to suggest selective serotonin reuptake-inhibitors, arguably the most often employed antidepressants of today, are also linked with increased fracture risk (Wu et al., 2012). Why this is the case even though sedation or low blood pressure are seldom reported experiences remains to be determined by future studies.

In any case, this meta-analysis highlights the importance of not just considering the diagnosis, but the human who bears it and their situation.