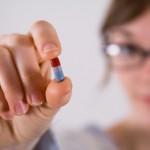 A large observational study from Finland has found that women who drink alcohol and take selective serotonin reuptake inhibitor antidepressives (SSRI) during the first trimester of pregnancy significantly increase their risk for foetal alcohol spectrum disorders.  The study also found an increase in risk for some major congenital malformations associated with the use of SSRIs during the first trimester.

As many as 3-6% of pregnant women will be treated with SSRIs at some stage during pregnancy, but the evidence on the risk of congenital malformations associated with use of these drugs is conflicting.  This large population-based study took data came from an ongoing project, Drugs and Pregnancy, which uses data from existing national registries for surveillance of drug use during pregnancy. Using this, the authors constructed a cohort of all births, still-births and terminations due to major foetal malformation in Finland between 1996 and 2006 inclusive, and identified major congenital abnormalities in this group. Using prescription reimbursement data, they identified pregnancies that had been exposed to SSRIs during the first trimester. Crude and adjusted odds ratios (OR; 95% CI) were calculated for overall major congenital anomalies and specific organ group major congenital anomalies in SSRI exposed vs. non-exposed (reference group) offspring.

There were 635,583 offspring identified for the study period, of whom 6,976 (1.1%) were exposed to SSRIs during the first trimester. The relative proportions of live births, stillbirths, and terminations due to major malformation were similar for both groups. In comparison with those who did not, women who took SSRIs during early pregnancy were more likely to be unmarried, to smoke, to have a chronic illness, and to have been dispensed other psychiatric medicines during pregnancy.

The authors conclude that in their analysis, they found increased risk of cardiovascular malformations associated with exposure to fluoxetine or paroxetine during the first trimester of pregnancy, supporting the results of other published analyses. There was also an association between citalopram use and neural tube defects, and all SSRIs and foetal alcohol syndrome. They note the limitations of the analysis, in particular the risk of chance associations due to the large number of comparisons performed, and the small numbers of events for some associations that could reflect random associations; however they point out that in vitro work has identified a plausible biological mechanism. They conclude that the absolute increases in risk are small, but suggest that the increased risk of cardiovascular malformations with fluoxetine and paroxetine should be considered when choosing an SSRI for a woman who is pregnant or planning to be. They also note the increased risk of foetal alcohol syndrome and recommend that special attention should be given to alcohol use, smoking, and use of other psychiatric drugs in pregnant women using SSRI.

There is some controversy around this topic as the evidence is quite conflicting.  Current UK guidelines say that non-pharmacological treatment is preferable for pregnant women with depression, but drug treatment may still be necessary. This research urges caution, but it remains the case that SSRIs may be used where clinically appropriate at the lowest effective dose and the pros and cons of use should be discussed with the patient.