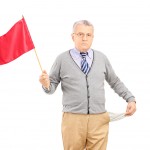 Have you got a ‘poshfroc’ or even a ‘jobfroc’? Are these part of life’s necessities? These idle questions may spring to mind when thinking about really big issues like pensioner poverty and changes in deprivation levels over the years. With the Care Act 2014 implementation rapidly approaching and rethinking what is needed about ‘care accounts’ and ‘deferred payments’ the subject of pensioner poverty can sometimes seem like the remains of a bygone age.

Social work with poor older people has a long but largely neglected history. The poverty of older people in contact with the social worker or almoner was almost assumed. However, by the 1970s the presence of the Child Poverty Action Group at social work conferences was a mark of how the profession was engaging with poverty as a subject – the evidence and the campaigns. Age Concern and groups of older people (pensioner power) provided expert and personal testimonies of engrained hardship in old age. The main focus is on older people’s perceptions of necessities. So, for example, is a ‘jobfroc’ necessary or a ‘poshfroc’?

Patsios’ article brings us to current times with a bump. He notes ‘the proportion of pensioners living in poverty is at its lowest for almost thirty years’. This is a huge change. But the main focus of the article is not on these trends but on older people’s perceptions of necessities. What do they regard as a ‘necessity’? So, for example, is a ‘jobfroc’ necessary or a ‘poshfroc’ (these terms of course don’t refer to frocks necessarily but clothing suitable for smart or clothes appropriate event, such as parties or weddings)? What is being talked about here is what is in the ‘basket’ of items that is used to measure whether people are deprived relative to others and indeed whether they feel deprived.

In this accessible but necessarily technical article, Patsios explains the importance of knowing how material and social deprivation (stuff like clothes, shoes, washing machine ownership) is calculated if we are to understand deprivation. He advocates using measures of relative rather than absolute deprivation.

Despite decades of work on measurements of deprivation more research needs to be done on how to work out relationships between income poverty and material deprivation as these are particularly important to many older people. This is a matter for public policy across Great Britain and Northern Ireland; a strength of this article is that it alerts us to country differences.

Important for social care practice is Patsios’ recommendation that people studying deprivation (and presumably ageing overall) need to investigate what is happening to older people who still live in severe poverty – for while these are reducing in overall numbers they still exist. He reports recent evidence, for example, that there are still approximately 1.6 million older people (aged 65 and over) living in relative income poverty in the UK and 900,000 living in severe poverty. The research discusses what’s in the ‘basket’ of items that’s used to measure whether people are deprived relative to others and whether they feel deprived.

Discussion and summing up

For social care practitioners older people living in severe poverty are an important group whose poverty affects their ability to do things such as heat their homes, to socialise and to meet the sometimes hidden costs of being a volunteer, carer, or friend. The link between severe poverty and social care use (or non use) could be better highlighted in social work debates about its professional focus in my view.

So our celebration that the proportion of pensioners living in poverty is at its lowest for almost 30 years is tinged by the fact that the proportion of older people in poverty living in severe poverty is increasing. These may be the silent older people – shamed by their circumstances and sometimes angered by presumptions that pensioners are all doing well. Preparations for the Care Act 2014 need to be aware of income inequalities as well as other demographics. Older people living in severe poverty are an important group for social care, whose poverty affects their ability to do things like heating their homes.

Patsios, D (2014) Trends in older people’s perceptions of necessities and deprivation in Great Britain and Northern Ireland: what difference did a decade (or so) make? Journal of Poverty and Social Justice, vol 22., pp. 227-251 [Abstract]