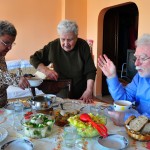 In the past, older people needing social care support had little choice in deciding where to live beyond moving into a care home or staying in their own homes, even if this environment was increasingly unsuitable in terms of their needs for support.

The expansion of housing with care, or extra care housing as it is often known, has been widely welcomed as an alternative allowing people to retain their independence and the symbolic importance of having their own front door, while still being able to call on additional support without the loss of independence they fear might happen should they move into a care home. Over time these schemes have expanded, ranging from large retirement villages to small apartment developments.

A number of studies have sought to explore the views of older people living in these schemes. Many of these are small scale and focus on a single development but a large evaluation of 19 extra care housing schemes in England (Netten et al., 2011) found that most residents reported a good quality of life and that the costs were similar or less than if they had moved into a care home. Such developments are not exclusive to the United Kingdom. The setting for this study is Quebec, the second most populous province in Canada where the population of people aged 65 and over is expected to reach 26 per cent by 2031.

It aimed to compare how facilities and services provided in extra care housing (or as it is termed here, alternate housing) differed from those provided in nursing homes.

The authors obtained a list of alternate housing developments across the province and selected a random subsample of 82 residents. Then they identified nursing homes in the same geographical area and recruited an identical number of residents matched by age, gender, and disability to form a comparison group.

Each individual was assessed using a range of established tools. Each individual was assessed using a range of established tools

Both groups proved to be similar in terms of their demographic characteristics, cognitive functioning, social engagement and presence of behavioural problems. The only difference was that the nursing home residents proved to be slightly more disabled, mainly because the nursing home records used to check their eligibility for inclusion in the study were out of date. This is perhaps an example of the unintended benefits of research.

These similarities are unsurprising given the sample selection methods but they help set the context for the main study findings because they suggest that any differences between the groups are probably ‘real’ and cannot be explained by variations in residents’ needs.

While most residents were comparatively satisfied with their care, scores among those living in alternate housing developments were higher overall. A key difference was that alternate housing was seen as more comfortable and spacious with greater privacy.

These residents were also more satisfied with their relationships with other professionals and the way their support was organised. In some instances, people in rural area were still able to remain within their local communities because of the option to move into an alternate housing development.

However, there was a group of residents in both settings who considered they had little control over their lives and who felt they received little social support. The authors conclude that alternate housing developments are able to support residents with considerable support needs but question their ability to support those needing more complex care, especially at the end of their lives.

The alternate housing developments offer greater choice for older people and some advantages in terms of costs over nursing homes because of the way that these costs are calculated.

However, there is a risk that they continue to focus on physical care, rather than residents’ wellbeing and fail to live up to their potential to provide rehabilitation services and a range of social and recreational activities.

With its cross-sectional design, the study can only offer a ‘snapshot’ into residents’ lives, rather than being able to both groups over time, as the authors fully acknowledge.

The use of a range of different established assessment ‘tools’ means that it is possible to compare the two groups of residents in an ‘objective’ way. However, the absence of the direct voice of the older people themselves makes the article seem rather dry.

One irritation for me was the repeated use of the abbreviations ‘AHMs’ for alternate housing models and ‘NHs’ for nursing homes. Abbreviations for complex chemical compounds are fine; otherwise, they should be avoided.

A more substantive point is that the tables present mean scores to illustrate differences between the two groups whereas the authors often use percentages or grouped scores in the text. The latter are often the more telling – for instance the disturbing finding that only one quarter of residents in both settings demonstrated good levels of psychosocial health.

Overall, however, this is a well designed study. It contributes to the growing housing and support literature – the discussion is especially detailed and draws well on the international literature. It was funded by the provincial government thus avoiding any potential conflicts of interest or accusations of bias that might have been made had it been funded by organisations involved in providing alternate housing models or nursing homes. The main focus is often on the physical environment, not on how well each setting meets older people’s aspirations or provides them with a good quality of life

The challenge of combining choice with cost effective support in old age affects almost every country in the developed world. However, as the authors point out, the main focus still often seems to be on the physical environment, not on how well each setting meets older people’s aspirations or provides them with a good quality of life.

The report of the Commission on Residential Care (2014), explaining its decision to refer to ‘housing with care’ rather than the more familiar ‘residential care home’ argued that we need to separate out the decisions about the ‘what’ of care from the ‘where’ we live. This seems to make sense, given that residents in care homes and extra care housing often share similar needs and preferences.

At the same time, we know that proportionally fewer older people have moved into a care home than in the past (Office for National Statistics, 2014). Is this due to better health, more care being provided by family members, a preference to remain at home among those who fund their own care or better housing support in the form of handyperson schemes and care and repair to enable people to remain at home for longer? We do not really know, although it is likely that all of these have played a part.

In his personal inquiry into care homes, John Kennedy described the market as ‘erratic, chaotic and unresponsive’ (Kennedy 2014). This article highlights the dominance of funding decisions in determining the types of care people are offered. However, it also highlights how old patterns of care can be replicated in new forms of service development. When this happens, choice may become more of an illusion than a reality.

Office for National Statistics (2014) Changes in the Older Resident Care Home Population between 2001 and 2011. [Full Report]