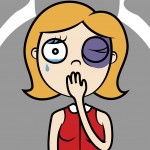 However, we know very little about the prevalence of domestic violence, because previous studies have been of quite poor quality and have not appraised the validity and applicability of the primary research they have included. What we do know is mostly about the prevalence of domestic violence in women, as previous reviews have tended to neglect violence committed towards men.

A new systematic review published in the British Journal of Psychiatry aims to estimate the prevalence (adult lifetime and past year) of different types of domestic violence experienced by men and women receiving psychiatric treatment.

The reviewers from the Institute of Psychiatry and the University of Bristol searched for different sorts of experimental studies that either measured the prevalence or risk of adult lifetime and/or past year domestic violence, or included data from which these statistics could be calculated.

Studies included psychiatric patients (men or women) aged 16 or older, who were receiving care in inpatient, outpatient or community-based settings.

Domestic violence was defined as:

Any incident of threatening behaviour, violence or abuse (psychological, physical, sexual, financial or emotional) between adults who are or have been intimate partners or family members regardless of gender or sexuality. (Home Office, 2005)

The reviewers identified over 40,000 references from their searching and eventually whittled the number down to 42 studies that were included in their review.

None of the included studies had a control group.

It’s also worth noting that the same authors published a very similar review (Trevillion, 2012) in the open-access PLoS ONE journal, which included one study less in the analysis. That review aimed to estimate the prevalence and odds of being a victim of domestic violence by diagnostic category and sex. The results of that review included these findings:

Compared to women without mental disorders, there is a higher risk of experiencing adult lifetime partner violence among women with: