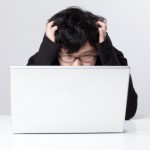 Web-based education support for people with health problems is now widespread, but there is comparatively little research that explores the reasons why people do not complete online courses once they are enrolled.

This paper presents data from a randomised controlled trial based in Australia, where 370 participants were randomly allocated to:

The main predictors of attrition (drop-out from the study) were:

The discussion section of the study includes some interesting observations:

The dropout rate was equivalent to other Internet interventions and to face-to-face therapy. Findings from our qualitative study provide participant-reported reasons for discontinuing the online intervention, which, in conjunction with the quantitative investigations about predictors, add to understanding about Internet interventions. However, further research is needed to determine whether there are systematic differences between those who complete and those who do not complete eHealth interventions. Ultimately, this may lead to the identification of population subgroups that most benefit from eHealth interventions and to informing the development of strategies to improve adherence.