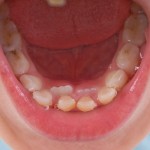 The aim of this study was to compare the use of ferric sulphate (FS), formocresol (FC), mineral trioxide aggregate (MTA) and sodium hypochlorite (NaOCl) as pulp dressing following pulpotomy in primary molars.

Symptom-free vital primary molars with carious pulp exposure with the possibility of proper restoration of the teeth with a minimum of three walls of the tooth present; and no resorption of more than one-third of the root were included. The molars were randomised to either the control (FC) or experimental (MTA, ferric sulphate, and NaOCl) groups. Standardised clinical procedures were conducted with teeth being restored with stainless steel crowns.  Patients were clinically and radiographically followed up at 6, 12, 18, and 24 months.

No statistically significant differences among the four materials were found at 24 months suggesting that NaOCl may be an appropriate substitute for FC.

Because caries remains a significant problem in children the need to manage pulpally involved primary molars effectively remains an issue.  The use of FC for primary molar pulpotomy is controversial as noted by the authors so this study comparing different medicaments is interesting.  The authors discuss the challenge of compliance and the dropout rates and also touch on the issue of exfoliation.  However, with the high level of drop out seen in the three of the groups (all over 40%) it is difficult to agree with their final conclusion.  In addition with the inclusion of 100 teeth from 81 patients the issue of clustering should also have been taken into account.