Home » Posts » Publication types » randomised controlled trial » What is the relationship between eating disorders and crystal meth use? 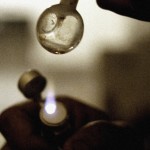 Epidemiological studies show that 50% of individuals with eating disorders abuse alcohol or illicit drugs, conversely up to 35% of those who abuse substances have eating disorders (ref: CASA report).

Little is known about the association between eating disorders and methamphetamine (commonly known as crystal meth) use. Many methamphetamine users say that they take the drug to help them lose weight.

This study (available in full-text on the PubMed website) claims to be the first to examine the relationship between eating disorders and both substance use and functional outcomes in methamphetamine-dependent adults. The study included 526 patients who all met DSM-IV criteria for methamphetamine dependence, were all current methamphetamine users (having used the drug within one month prior to treatment admission unless in a constrained environment, e.g. jail), were all resident of the same geographic area as the treatment facility, English language proficient, and able to provide informed consent.

Patients were interviewed 3 years after treatment completion, given a medical examination, a psychiatric diagnostic interview, a psychosocial interview, and administration of self-report questionnaires.

Bulimia nervosa was observed among 2.4% (N = 13) of the participants and was associated with poorer methamphetamine use outcomes, increased health service utilisation, and higher levels of functional impairment.

Addressing methamphetamine use among adults with eating disorders may be helpful as a means of improving treatment outcomes.

The National Center on Addiction and Substance Abuse (CASA) at Columbia University Food for thought: Substance abuse and eating disorders. 2003.