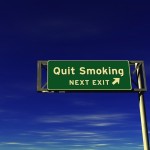 Around 20% of adults in the UK smoke cigarettes regularly. Smoking was the primary cause of approximately 462,900 hospital admissions and 79,100 (18%) deaths in adults over the age of 35 last year. Therefore, smoking cessation represents a serious (and costly!) clinical challenge on an individual and global level.

Many smoking cessation aids are available, including over the counter treatments such as nicotine patches, gums and inhalers, known as Nicotine Replacement Therapy (NRT). Prescription drugs such as bupropion and varenicline are also widely used. These treatments have differing degrees of efficacy as well as potential side-effects (which we have discussed in a previous elf blog). Despite the treatment options available, quitting rates are low and there is little available guidance to inform health care providers as to which treatment should be provided for any given smoker.

A recent study published in the American Journal of Psychiatry set out to examine the optimal treatment strategies for individual smokers who did not respond well to initial treatment with NRT. The authors performed a double-blind, parallel-arm adaptive treatment trial, consisting of two separate phases. Smokers who expressed a desire to quit were recruited using various media advertisements. To be eligible, participants had to smoke more than 10 cigarettes per day for 3 years and have an expired breath carbon monoxide (CO) reading of at least 10 ppm (parts per million). Following screening of 1,256 smokers, 606 were eligible and enrolled into the study.

The volunteers attended a research center weekly for two weeks prior to a target quit date, during each visit brief support was given and various measures including smoking diaries, expired CO and withdrawal symptoms were recorded.  The first line treatment was open-label NRT which everybody received, chosen for its safety and tolerability.

There were two phases to the research, each with a different hypothesis.

This phase examined whether individuals who did not respond adequately to first line NRT could be ‘rescued’ by switching to a different treatment strategy. Individuals were classed as ‘non responders’ if their expired CO did not reduce by more than 50% in the first week of NRT.

These non responders were then randomly assigned to one of three treatment strategies:

NRT was not augmented with varenicline due to increased risk of adverse effects. The primary measure of interest was continuous abstinence 8-11 weeks after the target quit date.

313 smokers were categorized as non responders and were randomly assigned to one of the three strategies. Individuals who remained on NRT alone following initial poor response had low abstinence success rates of 16% after 8-11 weeks, which reduced further to 5.8% after 6 months. NRT augmented with bupropion significantly improved continuous abstinence rates compared to NRT only after 8–11 weeks (28.3%; p=.04; odds ratio = 2.06, 95% CI=1.05 – 4.07). Significant improvements in both continuous and point abstinence were demonstrated up to 6 months later.

This phase set out to examine whether a change in treatment strategy could ‘rescue’ individuals who had lapsed one week after their quit date. Lapsers were identified as individuals who self reported taking even one puff of a cigarette, or who provided a CO reading over 10 ppm. 95 lapsers were randomly assigned to one of the three strategies used in phase 1 and given a second quit date exactly one week later. If individuals did not lapse they remained on NRT.

Individuals who lapsed after one week showed no significant improvements in continuous or point abstinence if NRT was augmented with bupropion, or if they were switched to varenicline, compared to those who continued with NRT only.

The results of the study support an adaptive smoking cessation strategy and suggest that individuals who do not respond to NRT as a first line treatment before their quit date may benefit from a switch to an alternative therapy. Specifically, augmenting NRT with Bupropion led to an abstinence rate 2-3 times higher than continuation of NRT alone at later follow-ups. There were also some improvements among smokers who switched to varenicline. However, using the same adaptive treatment strategies to rescue smokers who relapsed after one week of the quit date had no significant beneficial effects on abstinence. The authors correctly point out that the results of phase 2 should be interpreted with caution due to relatively small group sizes. Furthermore, whilst the adaptive treatment led to a significant improvement in ‘non-responders’ the actual abstinence rates after 6 months were still relatively low (13.1% for NRT augmented with bupropion). Future research should investigate which smokers will respond best to adaptive treatment by examining predictive markers of smoking and treatment efficacy such as genes.

The principle finding from this research is that individuals who did not respond to NRT by reducing their smoking were identified before their target quit date, therefore no participants actually relapsed before receiving adaptive treatment. By doing this the authors suggest that:

we could minimize the deleterious effects of relapse on motivation and retention in treatment.

To conclude, it may be possible to ‘rescue’ smokers who do not respond well to NRT before their quit date, by offering alternative pharmacotherapies instead.

The target study is also discussed in a podcast (August 2013) from the American Journal of Psychiatry.