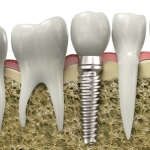 The traditional approach to placing dental implants was to submerge them and keep them load-free for 3–8 months to minimize the risk of implant failures.  During the healing phase temporary prosthesis are often used and patients can find these uncomfortable. Consequently shorter healing periods without jeopardizing implant success would be beneficial.   Nowadays immediate and early loaded implants are commonly used and a Cochrane review in 2009 (Espositio et al) found no statistical difference between these two approaches and called for more well designed randomised controlled trials.   The aim of this trial was to compare immediate versus early non-occlusal loading of dental implants placed flapless in a 3-year, parallel group.

This was a single site study. Patients were randomised to either the  immediately loaded group ( n=30)  or  the early loaded group ( n=30).   One experienced surgeon performed all the operations. The outcomes were prosthesis failure, implant failure, biological or prosthetic complications and peri implant marginal bone level.    The majority of patietns receive a single implant.

At 3 years there was

The null hypothesis of no difference in failure rates, complications and bone level between implants that were loaded immediately or early at 3 years cannot be rejected in this randomized clinical trial.

At that time they concluded

It is possible to successfully load dental implants immediately or early after their placement in selected patients, though not all clinicians may achieve optimal results. It is unclear whether it is beneficial to avoid occlusal contacts during the osseointegration phase. Trends suggest that immediately loaded implants fail more often than those conventionally loaded, but less commonly than those loaded early. If a clinician wishes to load the implants early, it might be wiser to load them immediately (within 1 week) rather than waiting for 1 or 2 months. A high degree of primary implant stability (high value of insertion torque) seems to be one of the prerequisites for a successful immediate/early loading procedure. More well designed RCTs are needed and should be reported according to the CONSORT guidelines.

Last reply was February 4, 2012
Try out our members features!