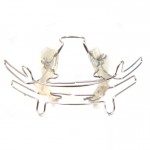 Obstructive sleep apnoea/hypopnoea syndrome (OSAHS) is though to affect around 4% of the male and 2% of the female population of North America. Continuous positive airway pressure (CPAP) particularly for moderate to severe cases.   The aim of this cross-over trial was to compare the two types of mandibular advancement appliances (MAAs) with different structures, retention forms and materials, regarding their subjective and objective efficiency

The participants had mild to moderate OSAHS with an Apnoea Hypopnoea Index (AHI) between 5 and 30 by polysomnography (PSG) and no other sleep disorders.  Following the recording of optimal mandibular advancement position patients were randomised to either , a one-piece monoblock or the SILENT NITE® (GlideWell Laboratories, Newport Beach, CA, USA), a two-piece appliance. Each oral appliance needed to be worn for two 3-month periods separated by a 2-week wash-out period in between.  Outcome measures included Epworth’s Sleepiness Scale (ESS) (17, 18) and the Snoring Scale (SS) and PSG.  Compliance and side effects were evaluated by interviews with patients and their families.

Both MAAs showed good efficacy in the treatment for mild to moderate OSAHS. Use of the monoblock appliance should be considered when patients with OSAHS choose MAA treatment, as it was more efficient in reducing the AHI and AI compared to the two-piece appliance and was preferred by most patients. Long-term efficiency should be evaluated in future prospective studies.

A 2006 Cochrane review by Lim et al looked at oral appliance treatment of OSAHS concluding that:-

There is increasing evidence suggesting that oral appliances (OA) improve subjective sleepiness and sleep disordered breathing compared with a control. CPAP appears to be more effective in improving sleep disordered breathing than OA. The difference in symptomatic response between these two treatments is not significant, although it is not possible to exclude an effect in favour of either therapy. Until there is more definitive evidence on the effectiveness of OA in relation to CPAP, with regard to symptoms and long-term complications, it would appear to be appropriate to recommend OA therapy to patients with mild symptomatic OSAH, and those patients who are unwilling or unable to tolerate CPAP therapy. Future research should recruit patients with more severe symptoms of sleepiness, to establish whether the response to therapy differs between subgroups in terms of quality of life, symptoms and persistence with usage. Long-term data on cardiovascular health are required.

Since then there have been a number of further studies (eg Dental Elf 22nd Aug 2011) including this trial that show improvements in OSAHS  with  MAAs , However while they are relatively non-invasive there are some concerns regarding potential side effects on the dentition (Dental Elf 6th June 2012) particularly with longer term use.