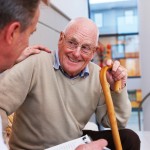 This randomised controlled trial conducted by researchers from Weill Cornell Medical College in New York State, attempted to find out if problem-solving therapy is better than supportive therapy for reducing disability in older adults with depression and executive dysfunction.

The trial took 221 older adults (aged >59 years) with major non-psychotic depression and randomised them to either:

These results suggest that PST is more effective than ST in reducing disability in older patients with major depression and executive dysfunction, and its benefits were retained after the end of treatment. The clinical value of this finding is that PST may be a treatment alternative in an older patient population likely to be resistant to pharmacotherapy.