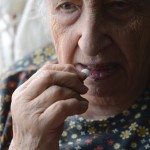 Dementia is one of the most common and serious disorders in later life. It places a considerable burden on the health care system, individuals and especially unpaid carers. Depression is common among people with dementia and causes additional distress to affected individuals and their social circle. Research into the treatment of depression in dementia is therefore an important priority.

In spite of weak evidence, current clinical guidance and practice is to give antidepressants as first-line treatment for depression in dementia. To address this gap in the evidence base, the Health Technology Assessment programme of the UK National Institute for Health Research commissioned the HTA-SADD trial.

The researchers were primarily interested in answering the following question: In spite of weak evidence, current clinical guidance and practice is to give antidepressants as first-line treatment for depression in dementia

This was a randomised controlled trial with allocation concealment, blinding of participants, carers and outcomes assessors, and analysis was by intention-to-treat.

Participants had possible or probable Alzheimer’s disease and depression for at least four weeks. were recruited from community old age psychiatry services in nine centres throughout England. They were randomised to three groups: mirtazapine, sertraline, and placebo. There were 339 participants in total.

The researchers found no significant differences in either Cornell Depression Scale scores or QALYs between the groups at either 13 or 39 weeks:

Carers of the participants in the mirtazapine group had higher health-related quality-of-life scores at 13 weeks (this effect did not carry through to 39 weeks). The most striking result of the trial, however, is that the time they spent caring for their relatives was halved from baseline in the long run. Do we need to rethink the prescribing of antidepressants to people with dementia?

This is a trial with negative findings but important clinical implications. The data suggest that the antidepressants tested, given with normal care, are not clinically effective compared with placebo for clinically significant depression in Alzheimer’s disease. This implies a need to change current practice of antidepressants being the first-line treatment of depression in Alzheimer’s disease.

The trial casts doubt on the use of antidepressants as a first-line treatment for depression in dementia, suggesting that because of their side effects, drugs from the same class as sertraline (SSRIs) might not be beneficial for this population. However, there was a definite benefit to those patients (and their carers) who were on mirtazapine, which the researchers attribute to the drug’s ability to ameliorate sleep disturbances and anxiety.

However, the trial has several limitations. For one, there were high dropout rates in all groups (slightly lower in the placebo group than in either of the active treatment groups). Also, the target sample size was revised during the trial because recruiting was slower than expected. However, the authors assure us that even achieving the original trial target size of 507 as opposed to the actual 326 subjects would not have generated a statistically significant positive result for either antidepressant.

Further research is needed in the following areas: