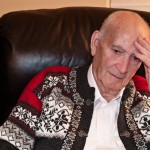 It has consistently been shown that a link exists between older adults who have depression and mortality (Cuijpers & Smit, 2002, Schulz et al., 2002). RCTs have demonstrated that treating depression during later life in primary care settings can result in the remission of depression and its associated symptoms as well as improve quality of life for individuals.

Recently, an RCT was conducted by Gallo and colleagues (2013) which aimed to investigate whether an intervention to improve treatment for older adults with depression in primary care modified the increased risk of death which is associated with depression.

The study shows that older adults with major depression in practices provided with extra resources to intensively manage their depression had a lower mortality risk compared to those in usual care and similar to older adults who don’t have depression. Participants were enrolled if they had a CES-D score above 20 when they presented to an appointment with their family doctor. Overall, 213 patients died out of 616 in the intervention group over 98 months of follow-up.  In the usual care group, 192 died out of 622 patients.  Looking at the outcomes in more detail, the authors reported:

We disagree with these conclusions based on the evidence presented here.  The above results came from an “adjusted model”.  It is not clear exactly what adjustments were made.  However, when we looked at the absolute mortality numbers, we found that conducting the adjustment had shifted the conclusions in favour of additional treatments:

We don’t need to work out the confidence intervals to see that these values suggest “no difference” between the groups, in direct contradiction of the claims made by the adjusted model.  In the woodland, this sort of thing makes our elf-noses twitch.

We don’t agree;  we don’t think that this trial provides sound evidence to support that conclusion, neither from the data reported, nor after consideration of the apparent methodological limitations described below. This study is the first of its kind from an RCT perspective which clearly shows that treating major depression in older adults using interventions in primary care settings can extend life.

They did not provide an adequate rationale for including 5% of the eligible population whose CES-D score was 20 or less.

Since randomisation was carried out at the practice level, it is likely that selection bias occured because researchers could know which treatment group a patient would be assigned at the point at which they were invited to take part.

It seems almost certain that the two groups – intervention and usual care – were different at the start of the trial, and treated differently throughout. Therefore we cannot say that this trial provides reliable information about the research question.

The authors claimed that they used several strategies to control for factors that could have affected the findings. They matched practices on: urban location, academic affiliation, size and population type before randomization. Secondly, they adjusted estimates of risks and associated confidence bounds for clustering by practice and for patient level characteristics associated with mortality. Thirdly, they compared the mortality of patients with depression with non-depressed patients from the same sets of practices to mitigate the influence of unmeasured characteristics of practices. Our interpretation is that the intervention and usual care groups were different at the start of the trial and treated differently throughout, so this RCT can’t reliably answer the research question

However, misclassification for depression could have occurred and influenced the results. Depression and other mental health problems can be underestimated in older people as they can minimize their symptoms i.e. reports of sadness or anhedonia and because depressive symptoms are commonly attributed to physical health causes. The authors claim that trained research associates used PROSPECT which includes sensitive instruments (a clinical interview for axis 1 DSM-IV disorders and Hamilton Depression rating scale) to rate the severity of depression. Authors also discuss the strategies they used to control for vital status.

The implications of this study are that providing resources to primary care practices to integrate depression care management into chronic care management can extend life for older adults with depression. However, the case is far from proven and more evidence is needed to clearly establish these benefits.