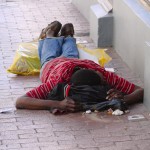 Recent work by Suzanne Fitzpatrick and colleagues from Heriot Watt University has investigated the experiences of people who are affected by what they call multiple exclusion homelessness; a combination of homelessness, substance misuse, ‘street’ activities such as begging and street drinking, and institutional care (e.g. prison).

Their quantitative survey shows that there is considerable overlap between homelessness and these other forms of social exclusion (substance misuse, street culture etc), which clearly makes caring for this population a complex challenge (Fitzpatrick, 2012).

One approach to caring for homeless people with many other complex issues (including mental illness) is Critical Time Intervention, which was originally developed by researchers and clinicians at Columbia University and New York State Psychiatric Institute.

An empirically supported, time-limited case management model designed to prevent homelessness and other adverse outcomes in people with mental illness following discharge from hospitals, shelters, prisons and other institutions.

The theory behind the intervention is that homelessness and other adverse events can be minimised or prevented by:

Post-discharge care is provided by a social worker who has already established a relationship with the patient during their institutional stay (in psychiatric hospital).

A new randomised controlled trial published in Psychiatric Services explores the impact of critical time intervention on the occurrence of rehospitalisation among formerly homeless individuals with severe and persistent mental illness.

150 previously homeless people, currently residing in a New York City psychiatric hospital (and planning to stay in the same city on discharge) were included in the study. They were mostly male (71%) and African-American (62%) and aged 37.5 years on average. Many had a diagnosis of psychosis (61% lifetime diagnosis of schizophrenia and 35% schizoaffective disorder) and almost all (90%) had issues with substance misuse or dependence.

Patients were randomised to one of two groups:

Randomisation was single blind (the researchers who assessed the data were blind to the group into which patients had been randomised) and it was unclear from the study how allocation to treatment was carried out.

CTI was delivered by a trained social worker who got to know the patient during their stay in hospital and saw them regularly for 9 months post-discharge. Patients were followed up at 6-week intervals for a total of 18 months.

For the time being, mental health and social care professionals should consider CTI as a relatively inexpensive intervention that they can add on to their existing services for homeless people with complex needs.