Home » Posts » Publication types » randomised controlled trial » Counselling is as effective as CBT for depression, according to a reanalysis of RCT data 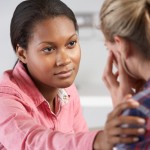 In recent years, cognitive-behavioural therapy (CBT) has become the most widely delivered therapy for depression within the NHS.  CBT interventions are recommended by NICE for people with mild, moderate and severe depression.

By contrast, recent NICE guidelines recommend counselling only for people with persistent subthreshold depressive symptoms or mild to moderate depression who decline another first line form of treatment; and professionals are urged to discuss with the person the uncertainty of its effectiveness.  But is CBT really more effective for depression than counselling?

In one of the largest randomised controlled trials to date (King et al., 2000), patients who had up to 12 weeks of non-directive counselling did just as well as patients who had up to 12 weeks of individual CBT.  However, the results of this study have been widely challenged on the grounds that a proportion of patients either did not meet the criteria for any psychiatric diagnosis, or received a diagnosis of an anxiety state.

As a consequence of this, King and colleagues have recently re-analysed their data (King et al, 2013), focusing specifically on clients who had been diagnosed with an ICD-10 depressive disorder.

The re-analysis looked at the data in two ways:

The outcome measures were the Beck’s Depression Inventory, the Social Adjustment Scale, and the Brief Symptom Inventory; at four and 12 months from baseline. In their first analysis, the authors found that the interaction between treatment type and ICD-10 diagnosis was not significant on any of the measures.  In other words, whether or not patients had an ICD-10 diagnosis of depressive episode did not affect how well they did in counselling, as compared to CBT.

The authors recommend that:

As one of the largest comparative trials yet conducted of CBT versus counselling for depression, this study provides strong evidence that both approaches are about equal in effectiveness.

It is possible that the sample size in the present study was too small to detect a meaningful difference; but the striking similarities in outcomes across the measures support the authors’ claim that ‘it is very unlikely that the therapies in this trial differed in clinical effectiveness’.

It is also possible that other forms of CBT would prove superior to non-directive counselling; but outcomes from the Improving Access to Psychological Therapies programme in England (e.g., Glover, Webb, & Evison, 2010) have replicated the present findings: indicating that CBT and counselling, as currently practiced in England, are about equivalent in effectiveness.

Nevertheless, the British Association for Counselling and Psychotherapy have recently commissioned a trial to directly compare CBT with Counselling for Depression for 550 patients: the PRaCTICED study (Barkham, 2013).  Hopefully, this trial will give a definitive indication of how these two interventions compare.