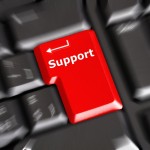 It can be incredibly difficult to talk about mental health conditions like depression, both for the person going through the illness and the friends and family who are trying to offer support. We know that overcoming this fear and talking through mental health problems can be a real life-saver and this message runs through the excellent Time to Change programme that aims to stamp out mental health stigma and discrimination.

Many of the mental health charities run confidential helplines where trained staff can offer information, advice and support on everything from legal advice to crisis support.

Another popular way for people going through mental health difficulties to communicate with each other is the Internet Support Group. These groups have been around pretty much since the Internet became popular in the mid-1990s and they pride themselves on the positive impact that they have on the lives of their members.

It is perhaps surprising, given that these online groups have been around for 20 years or so, that a 2009 systematic review concluded that there is insufficient evidence to report about the effectiveness of online support groups for depression. It’s clearly an area where the practice is far ahead of the research evidence, but of course that means that trials are badly needed to ensure we are not causing more harm than good.

Professor Griffiths led the 2009 systematic review and so it’s great to see that she has now followed this up by publishing a randomised controlled trial investigating Internet Support Groups for depression.

The trial participants were recruited via a screening survey that was sent to 70,000 adults in mixed rural and urban areas of Australia. 311 people (aged 18-65) all with elevated psychological distress (measured with the Kessler Psychological Distress instrument) were included in the study. People already receiving mental health treatment and those already participating in a mutual support group were excluded, as were those with self-reported current or previous psychotic or bipolar illness.

The participants were randomised to one of four interventions:

Each intervention lasted for 12 weeks with one module delivered each week. The interventions remained available for 12 months and assessments were made at baseline, post-intervention, 6 and 12 months. For ethical reasons, control participants were given access to the ITP E-couch system after 6 months.

The primary outcome was depressive symptoms measured with the Centre for Epidemiologic Studies Depression scale.

The authors noted that the sample size was smaller than they had hoped and although it was sufficient to detect the anticipated effects of each intervention alone, it was not large enough to provide a definitive answer about the efficacy of the combined ISG and ITP group.

Clinicians might consider referring interested clients to such groups and policy makers have a stronger basis for funding and promoting depression ISGs. The findings further suggest that there may be value in combining standard Internet training programs with an Internet support group since the effect of the ITP occurred immediately post-intervention and tapered off and the effect of the ISG was delayed and increased over time.

For many people, social media (Twitter, Facebook etc) has taken over from the traditional Internet Support Group as the main channel through which they can give and receive support to friends, family and others going through the same issues as them. Websites like Twitter provide access to a much larger group of people which can be positive, but it also comes with a number of challenges, not least that each message has to be less than 140 characters. It’s hard to pour your heart out in a tweet!

There remains an important place in all of this for Internet Support Groups; providing a safe, friendly and non-judgemental place for people to come together, share experiences and support each other. I look forward to seeing further studies that cement the place of these groups in the range of services that can be provided for people with mental health issues.

Last reply was January 15, 2013
Try out our members features!