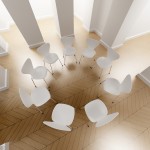 Cognitive behaviour therapy (CBT) is a tallking therapy which aims to help people to solve problems through a systematic goal-oriented process. existing NICE guidelines recommend CBT for a number of mental health issues. A recent review of the evidence on the potential of CBT as a treatment option for people with learning disabilities (Taylor et al 2008) concluded that the  although the evidence base is still quite small,

it suggests that the majority of people with intellectual disabilities (that is, those in the mild range) have the ability to engage in and benefit from cognitive behavioural interventions, particularly self-management approaches based on a cognitive deficit model, for a range of emotional problems.

The researchers in this study were interested in whether the use of a retrospective video reviewing process [Burford Reviewing Process (BRP)] could help people with learning disabilities to describe their experiences of cognitive behaviour therapy (CBT).

The authors describe the process in the paper and test its feasibility to look at how it could be used. They worked with twelve clients, who used the Burford Reviewing Process to review tapes of their fourth and ninth therapy sessions. Six clients reviewed the fourth session only.

The researchers recorded the reviews in order to create verbatim transcripts of  the clients’ comments and subsequently carried out a thematic analysis. This was done by a non CBT trained researcher. They found that all clients involved were able to follow the instructions for the BRP.

They found three themes from the analysis:

They did discover a fourth theme, but this related to those issues that were currently troubling clients, prompted by watching the video but not referring to the events on screen.

From this small initial investigation, the authors conclude that the Conclusions reviewing process appears to be a feasible approach giving insights into their feelings and opinions on CBT. They suggest further research and discuss potential developments of the procedure.

Do video reviews of therapy sessions help people with mild intellectual disabilities describe their perceptions of cognitive behaviour therapy? Burford, B. & Jahoda, A. In Journal of Intellectual Disability Research, 56: 179–190