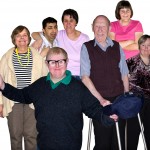 Considering the issues relating to consent to participate in research will apply to people with learning disabilities in the same way as to any other ‘human subjects’ , but they are often excluded from research on the basis that researchers perceive ‘learning disability’ as an automatic exclusion criterion, assuming this means lack of capacity to consent.

People with learning disabilities may struggle to understand some of the vocabulary used by researchers, or be unable to read or write, but we know from a growing body of experience that these are not insurmountable obstacles to inclusion, as it is possible to produce easy read documentation or produce information in audio or video formats.

The researchers in this study were interested in this issue of consent to be involved in a health promotion study. They wanted to explore the extent to which people with learning disabilities who took part in their study, were able to answer questions about key aspects of study disclosure. They also wanted to look at if there were differences between those who provided appropriate answers and those who had difficulties.

They were keen to look at any patterns of responses that might emerge to see if certain issues relating to the research were more difficult for some people to understand than others.

What they did was to develop a set of questions using which described aspects of the study and the nature of participation in it, and used administered these to look at the nature of the responses.

What they found was that more than half the study participants were able to answer the all the questions correctly .

For those people were not able to answer all the questions correctly, the issue that caused most difficulty was identifying the potential risks of being involved in the study.

The authors suggest that their findings add weight to the view that, given attention to the way in which information is provided, many people with learning disabilities would be able to provide their own consent to participate in low risk studies.

Last reply was November 6, 2013
Try out our members features!