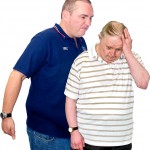 The researchers in this small study set out to explore the impact of interpersonal conflict on people with mild to moderate learning disabilities. Previous research has provided insights into the nature of the impact of such conflict on increasing stress and contributing to poor mental health, but few studies have looked at the experiences of young adults. The researchers in this study focused exclusively on this group.

They worked with 26 young adults with learning disabilities, aged between 16 and 20 and with 20 non-disabled young adults. Each of the participants completed a semi-structured interview about a recent experience of interpersonal conflict. They were each asked to describe their beliefs and feelings about the event and also regarding their response.

In addition, they were also more likely to characterise the other person involved as ‘bad’ and to perceive that the other’s actions were being directed at them personally.

The young women with learning disabilities in the study were less likely to describe responding aggressively to incidents.

The authors conclude from their findings that young adults with learning disabilities appeared the target of aggression from those outside their immediate social sphere. Their non-disabled counterparts however were more likely to experience conflict with people close to them.

They suggest that young adults with learning disabilities “may also be more likely to feel victimized by interpersonal conflict.”