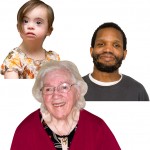 Researchers in this Australian study were concerned to consider the issue of planning for future care and support of people with learning disabilities after the death of parental caregivers. They were considered the need to adapt support systems to ensure the best possible quality of life for people with intellectual disability as they grow older. They set out to examine the perceptions of family members, group home staff and service managers about the future of older residents and how decisions were made regarding the need for a move to residential care for older people.

Using Grounded Dimensional Analysis, a methodological approach in qualitative studies which uses the constant comparison of data to enable coding and categorisation, the interdisciplinary research team carried out three sets of interviews over an 18 month period  with a family member, support worker and programme manager for each of seventeen older residents of a group home in Victoria, Australia.

For eight of the seventeen, it had been decided that a move to residential services for older people was necessary and the team asked a series of additional focused questions about the decision-making process for this sub group.

The researchers found that plans for lifelong accommodation in group homes had proved unfounded for many. Planning for  key worker succession was effective however.

They also found through focused questioning that decisions made regarding moves to residential care for older people for those involved were made in haste and seen as a ‘fait accompli’ by family members who were involved.

The authors conclude that although family members were often seriously involved in attempts to oversee the well-being of their older relative, they had little knowledge about the situation, their rights or ways in which they could challenge what might be inappropriate or untimely decisions made by professionals.