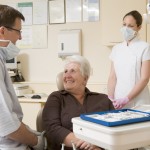 Regular dental examinations are considered an important element of preventive dental care. The aim of this cohort study was to assess the impact of routine dental attendance between the ages of 50 – 65 in relation to major tooth loss and Oral Health related Quality of life (OHRQoL)

In 1992 all 50-year-olds in two Swedish counties were invited to participate. Data was collected by questionnaire at 4 time points at age 50 and again after 5, 10, and 15 years.

While regular dental examinations are recommended there is still debate around their frequency. Although, since the publication of the NICE guidance on dental recall in 2004 there has been a move towards risk-based frequency intervals rather than a fixed 6-monthly period. There was limited direct evidence available at the time of the NICE publications so studies like this and the on going INTERVAL trial will be helpful. All the information was recorded using questionnaires (Unell 1999 and Ekbäck et al 2009) so was self-reported and the 5-years data collection point raises the potential for recall bias. The authors also highlight that this particular cohort may not of been representative of Sweden as a whole. Sweden also as a high dentist to patient ratio and low disease levels so the findings may not more generalisable.