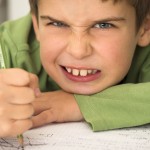 Conduct disorders are the most common reason why children are referred to mental health services and it’s estimated that around 5% of all UK children aged 5-16 have a diagnosis of the condition.

Around half of the young people affected by conduct disorders go on to have a serious mental health problem as an adult. Family life can be very difficult, schooling can be ruined and problems with drugs or the criminal justice system are common.

Conduct disorders are characterised by repeated and persistent misbehaviour much worse than would normally be expected in a child of that age. This may include stealing, fighting, vandalism and harming people or animals.

NICE and SCIE (the Social Care Institute for Excellence) have updated the 2006 technology appraisal on conduct disorder in children with this new guideline (PDF) that covers the recognition, treatment and management of antisocial behaviour and conduct disorders.

Key priorities in the guidance include: One headline recommendation from the guidance that received media coverage last week is that parents should adopt a consistent approach to caring for children affected by conduct disorder, which focuses on encouraging positive behaviour rather than disciplining their children. It also suggests that words like “no” may actually be a trigger for bad behaviour for some children affected by the condition. The problems associated with conduct disorder are often lifelong; as those who had a conduct disorder during their childhood are far more likely to develop another mental health disorder when they are an adult

All children can be naughty, defiant and impulsive from time to time, which is perfectly normal. However, some children have extremely difficult and challenging behaviours that are outside the norm for their age. Recognising and accurately diagnosing a conduct disorder is vital to ensuring children and their families are able to access the treatment and support they need to manage the condition.