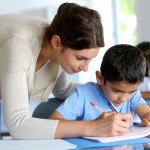 Early intensive behavioural intervention (EIBI) involves 20-40 hours of individualised instruction each week for children with autism. The therapy usually begins at age 4 or younger and continues for 2-3 years.  The technique was pioneered by Dr. Ivar Lovaas and colleagues in the 1970s.

A new systematic review from the Cochrane Developmental, Psychosocial and Learning Problems Group looks at the evidence for the effectiveness of EIBI in increasing the functional behaviours and skills of young children with autism spectrum disorders (ASD).

The evidence in this field is not as strong as we would like, which is why the reviewers decided to include a range of different study types in their review:

The systematic search conducted by the reviewers found 1 RCT and 4 CCTs with a total of just 201 participants. All studies had a treatment-as-usual comparison group.

The results of the CCTs were synthesised using a random-effects model of meta-analysis of the standardised mean differences.

There is some evidence that EIBI is an effective behavioural treatment for some children with ASD. However, the current state of the evidence is limited because of the reliance on data from non-randomised studies (CCTs) due to the lack of RCTs. Additional studies using RCT research designs are needed to make stronger conclusions about the effects of EIBI for children with ASD.