Home » Posts » Populations and settings » child and adolescent » Adolescent girls are less satisfied with their bodies compared to boys, according to Finnish cohort study 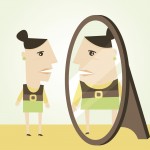 It’s hardly surprising that teenage girls and boys express dissatisfaction with their bodies. The vast majority of TV, magazine, billboard and Internet images of the human body present a wholly unrealistic and unattainable version of the male and female physique. Young people cannot help but compare themselves to these standards and feel that they come up short.

A new cohort study has been conducted on young adolescents in Helsinki Finland, to explore the links between excess weight, self-esteem and eating habits with body dissatisfaction (BD) in young people. The researchers asked young people to complete questionnaires and be physically examined (by school nurses) to see if there were any gender differences in how they felt about their bodies.

The following assessment tools were used:

1,370 adolescents were included in the study, mean age 14.5 years, from a representative socioeconomic sample of ninth grade secondary school students.

The researchers stratified by sex and conducted a linear regression analysis to assess the correlation between body dissatisfaction and excess weight, self-esteem and eating habits.

Body mass, self-esteem and eating habits revealed a significant relationship with body dissatisfaction in the transitional phase from early to mid-adolescence in girls and boys, but significant gender differences were also found.

There are no surprises here, but the study does add to our knowledge about body dissatisfaction in young people, as much of the previous research in this area has focused on young women and has been carried out in the US.

Clearly a cross-sectional study such as this cannot prove a causal link between excess weight, self-esteem and eating habits and body dissatisfaction. What it can do, is highlight the need for further research in this area, particularly studies involving both boys and girls.

Last reply was December 7, 2012
Try out our members features!