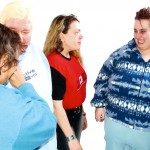 There is limited research into homosexuality and people with learning disabilities (see for example Norah Fry Centre project. What literature there is has identified low levels of knowledge, homophobic attitudes and negative experiences.

The researchers in this study looked at attitudes towards homosexuality and gender role beliefs in a group 27 of women with learning disabilities using three self-report measures.

They found that the women in this group also had limited knowledge about the issues, especially regarding lesbianism. They were also found to hold prejudicial belief and traditional gender beliefs. The latter were associated with more negative attitudes towards homosexuality.

The authors suggest that education focusing on flexibility of gender roles could help break down some of these traditionally held views as well as help to develop more positive attitudes towards homosexuality amongst women with learning disabilities.