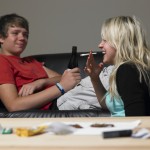 Drug and alcohol misuse among young people is a major problem, although overall use is starting to decline. The UK has one of the highest rates of young people’s cannabis use and binge drinking in Europe, with some 13,000 hospital admissions linked to young people’s drinking each year.

In recent years the number of specialist services for drug and alcohol misuse has increased so that young people can get the treatment they need. In 2010-2011 the number of under-18s accessing these services was 21,955.

The new standards are aimed at all staff in contact with young people aged 18 or under (in universal, targeted and specialist services) across health, social care, education, youth justice system, and the voluntary and community sector.

The standards propose that services invest in the psychosocial development and well-being of young people with substance misuse problems to give them the best chance of a normal life through:

Dr Dickon Bevington, of the Royal College of Psychiatrists, said:

Many of our most vulnerable young people have their lives further blighted by substance misuse. From a position just a decade ago of having minimal evidence for effectiveness, substance use disorder services for young people are now guiding many young people toward fuller lives.  These standards should be read as the next chapter in a conversation that has been gathering pace, where genuine collaboration between experts, agencies, and different professional groupings has been a founding principle.

These practice standards have a vital role to play in supporting the development of procedures, interventions and services that are both efficient and effective. I hope they will become a key reference resource for everyone working with young people affected by substance misuse problems, and will be used to inform workforce development, strategic planning and development, and delivery of care and treatment.