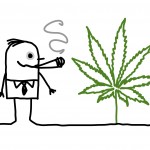 Delusional-like experiences (DLE) are quite common in the general population with a median prevalence of around 3.5% (ref 2). Studies show that these experiences often go hand-in-hand with other mental health conditions such as depression and anxiety, as well as other chronic physical disorders such as impairments in hearing and vision.  It is thought that DLEs may also provide a marker of vulnerability to suicide.

A number of studies about DLE have been published by researchers using data from the Australian National Survey of Mental Health and Wellbeing, which follows over 16 million Australian adults (aged 16-85).

8,773 people were included in this new cross-sectional analysis published in BMC Psychiatry, which looks at the relationship between tobacco, alcohol and cannabis and delusional-like experiences.

Participants in the study were interviewed to assess DLEs, mental health disorders and physical disorders and exposure to cannabis, tobacco and alcohol. People who responded positively to initial screening were asked more detailed questions to determine diagnoses. Those with schizophrenia were excluded.

Remaining participants were asked about their frequency of use, quantity of use, dependency and age of first use of cannabis, tobacco and alcohol.

The conclusions from this research are limited, as they are with many other large scale population-based surveys, because it is not possible to tell which of the substances (tobacco, alcohol or cannabis) was the major predictor of DLEs. The study did not look in detail at the frequency or severity of the delusions, or the impact they had on the daily functioning of the individual.

While cannabis use disorders have been previously linked with DLE, our findings linking alcohol and tobacco use and DLE suggest that the influence of these substances on psychosis-related outcomes warrants closer scrutiny in longitudinal prospective studies.