Home » Posts » Mental health » schizophrenia » The risks of benzodiazepines, antidepressants and antipsychotics in adults with schizophrenia 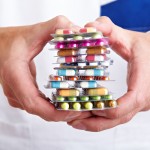 Polypharmacy is the simultaneous use of two or more drugs to treat a single health condition.

Polypharmacy is often used in the treatment of schizophrenia where people are regularly prescribed two or more antipsychotics, as well as antidepressants and/or benzodiazepines, although there is little evidence to prove that these combinations are more effective than monotherapy. It is thought that these combinations of drugs may be harmful, but research investigating the long-term effects is fairly thin on the ground.

This registry-based retrospective cohort study has been conducted by a research team from the University of Eastern Finland. The researchers have followed a cohort of 2,588 patients with schizophrenia and linked their medical records to national databases of drug prescriptions and mortality.

The aim of the study was to find out if the use of benzodiazepines, antidepressants or multiple antipsychotics were associated with an increase in mortality for adults with schizophrenia. The primary outcome was all-cause mortality and the secondary outcome was suicide.

The mean follow-up period was just over 4 years and they used hazard ratios (PDF definition) to measure the likelihood of death.

Benzodiazepine use was associated with a marked increase in mortality among patients with schizophrenia, whereas the use of an antidepressant or several concomitant antipsychotics was not. Antidepressant use was associated with decreased suicide deaths. The literature indicates that long-term use of benzodiazepines among patients with schizophrenia is more prevalent in other countries (e.g. the United States) compared with Finland, which suggests that benzodiazepine use may contribute to mortality among this patient population worldwide.

As always with this kind of observational research, there are inherent weaknesses in the study methodology:

These prescription patterns are interesting, but it may be that the use of these drug treatments indicates the severity of the mental illness rather than leading directly to the cause of death.