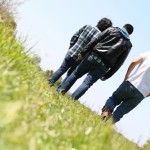 Community treatment orders (CTO’s) provide compulsory supervision outside of psychiatric hospital. They require patients to accept clinical monitoring in the community and enable them to be recalled to hospital for assessment if necessary. They do not authorise forcible treatment; however whilst on a CTO a patient may be ordered to meet certain requirements, such as taking medication or living in a specified place, which if violated may result in them facing readmission to hospital.

Since the introduction of CTO’s across England and Wales in 2008, approximately 4000 have been used each year. However despite seemingly wide use of the orders, very little evidence exists to support their efficacy, and clinical opinion appears to be divided across either side of the fence. The difficulties in testing a legal requirement through a randomised control trial have hindered possible research, as major legal and ethical barriers need to be overcome. It appears almost ethically impossible to evaluate the use of CTO’s in this way; you can’t withhold compulsory treatment from somebody who requires it by allocating them to a control condition, in the same way that you cannot allocate somebody who does not require compulsory treatment to receive it. Only two previous randomised controlled trails on CTO’s have been published (Swartz et al., 1999; Steadman et al., 2001); both of these were conducted in the USA and both failed to find any support for the use of the orders in terms of reduced readmission rates.

A randomised control trial (Burns et al., 2013) aimed to test whether patients with psychosis who were discharged from hospital on a CTO would have a lower rate of readmission to hospital over 12 months than those discharged on Section 17 leave. By law patients must be treated using the least restrictive option; however a legal opinion was unclear as to whether one of the regimes was more restrictive than the other. As it is also possible for a person to meet the criteria for both a CTO and Section 17 leave; the two options were able to be compared in this way. Both groups received equivalent levels of clinical contact but different lengths of compulsory supervision.

A total of 333 patients were included in the trial (166 allocated to CTO and 167 to Section 17 leave) from 32 NHS trusts; predominantly in the Midlands and southern England. Eligible participants were aged between 18 and 65, had a diagnosis of psychosis, had been involuntarily admitted to a psychiatric hospital, had capacity to give consent, were not subject to any other legal restrictions and were deemed suitable for supervised outpatient care by their clinician. CTO’s did not reduce hospital readmissions in the study

The primary outcome for the trial was whether or not the patient was readmitted to hospital in the 12 month follow up period. Secondary outcomes included; length of time to the first readmission, number of readmissions, total amount of time spent in hospital, clinical functioning, and social functioning. CTO’s may not be of benefit to patients, despite substantial deprivation of personal freedoms

This is the third, and largest, randomised control trial of CTO’s to date. The study found no evidence to suggest that CTO’s achieve their purpose of reducing readmission to hospital amongst people with psychosis, and consequently support the findings of the previous two trials.

The evidence is now building to suggest that CTO’s may not be of benefit to patients, despite substantial deprivation of personal freedoms. A CTO is a legal requirement, so in the face of this evidence the question arises of ‘what happens next?’. The authors recommend that current use of CTO’s be urgently reviewed, with the lead author declaring that,

We were all a bit stunned by the result, but it was very clear data and we got a crystal clear result. So I’ve had to change my mind. I think sadly – because I’ve supported them for 20-odd years – the evidence is staring us in the face that CTOs don’t work.