Home » Posts » Mental health » schizophrenia » Cochrane review finds that haloperidol is an effective antipsychotic, but its side effects can be problematic 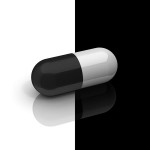 Schizophrenia is a serious disorder characterised by delusions (including paranoid beliefs and hallucinations) and other symptoms such as blunted affect and reduced motivation. While relatively uncommon (lifetime prevalence is less than 1%), it is associated with serious social impairment (e.g., unemployment, homelessness), which in turn can result in physical health problems. As a result, the life expectancy of people with a diagnosis of schizophrenia is 10 or more years less than those without (Chang et al, 2011).

Haloperidol is a dopamine inverse agonist belonging to the typical antipsychotic class of treatments for schizophrenia and related conditions. It was originally developed, in the 1950s, for use in anaesthetics, but subsequent research indicated that it had potentially therapeutic effects on hallucinations, delusions, aggression and impulsivity, all of which are symptoms of psychotic illnesses such as schizophrenia. It was therefore introduced as one of the first anti-psychotic medications.

This review evaluated the effects of haloperidol, compared with placebo, for the management of schizophrenia and other related mental health problems. The authors searched a range of databases, using standard Cochrane Collaboration procedures. This version of the review is an update of a previous version which included searches up to 1998. A valuable feature of Cochrane Reviews is that they are periodically updated, as new evidence emerges.

Studies which compared any oral dose of haloperidol with placebo in those with schizophrenia or a related psychotic illness were included.

These data were analysed using risk ratios (RR) for dichotomous outcomes and mean differences (MD) for continuous outcomes, including 95% confidence intervals. Studies with high loss to follow up (> 50%) were excluded.

A total of 25 trials, comprising 4,651 people randomised, were included in the updated review.

Haloperidol is an effective antipsychotic, but it also causes adverse effects.

The authors conclude, therefore, that where a choice of treatment is available, an alternative antipsychotic with a lower likelihood of causing adverse effects, such as parkinsonism, akathisia and acute dystonias, may be preferable. The authors also conclude that haloperidol should also be less favoured as an active comparator for randomised trials of new antipsychotics.

Interestingly, the conclusions of this update are not substantially different from the original review. However, evidence continually evolves, and the regular updates which are a feature of Cochrane Reviews are one of the main reasons why they are so valuable. Meta-analyses can become out of date very soon after they are published, as new evidence emerges. By encouraging periodic updates, the Cochrane Collaboration ensures it reviews remain timely and relevant.