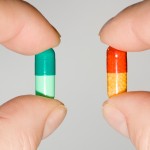 Because depression can have many “faces”, clinicians should be aware of the great symptom variability among depressed patients and consider subforms when prescribing medication.  In a sizeable amount of patients (up to 25%, Coryell et al., 1984), depression presents with psychotic symptoms, such as delusions or hallucinations.

As psychotic depression is usually associated with worse treatment outcome, its successful management needs stringent guidelines. In an attempt to provide these, an updated Cochrane review has looked at pharmacotherapy in psychotic depression (Wijkstra et al., 2013) more closely.

Several medical databases (Embase, Medline and PsycINFO) were searched for relevant randomised controlled trials (RCTs) and of the identified 3659 studies, 12 papers with in total 929 patients met inclusion criteria. Risk ratios (RR) and confidence intervals (CIs) are reported for all comparisons.

However, the authors are careful to note a considerable risk of bias because of heterogeneity across studies, including differences in treatment approaches (e.g. differences among used drugs) and outcome criteria. This review suggests that a combination of an antidepressant and antipsychotic is more efficacious than monotherapy in the treatment of psychotic depression. However, due to the limited empirical evidence, these results remain preliminary until further research is conducted. As always, carefully considered shared decision making is the order of the day, when the benefits and harms of drug treatment are not clear cut

For practitioners, the implications of this latest review are somewhat ambiguous. While there is some evidence to recommend polypharmacy, the decision of whether or not to add an antipsychotic deserves further consideration, given the gravity of common adverse effects. In any case, depressed patients suspected of psychotic features should be carefully assessed before antipsychotic treatment is initiated.