Home » Posts » Mental health » How useful was a visual aid to decision-making for people with learning disabilities? 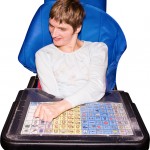 Being involved in the day to day decisions of our lives is a key part of self-determination. People with learning disabilities will often need significant support to enable this to happen.

This study looked at decision making for 24 people with learning disabilities (mean Full-Scale IQ = 59.8) who attended a day service.

Tasks were presented to those who took part which relating to ‘temporal discounting’ and scenario based financial decision making.

The results suggested that improved decision-making on both tasks in the group trained to use the visual aid were made. The performance of the control participants did not change.

The authors concluded that the visual aid increased the quality of reasoning supporting a decision and may also have potential in supporting wiser decision-making. They advise caution in generalising the findings, given the small number of participants and the relatively short effect time.

A visual aid to decision-making for people with intellectual disabilities. Bailey R et al., in Research in Developmental Disabilities, 32, 1, 37-46.