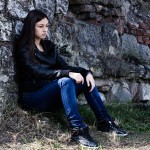 Clinical depression is unfortunately relatively common in adolescence with a prevalence of about 5%. The rates of suicide per 100,000 are around 12.0 for females and 14.2 for males aged 15-24 years with suicidality (thoughts or uncompleted attempts at suicide) likely to be higher. Research and clinical experience suggests issues relating to suicide and depression in adolescence can negatively affect romantic relationships in adulthood. For example previous research suggests that adolescents who experienced depression and/or were suicidal are more likely to experience partner violence when adults. This is obviously unacceptable and research to help understand and prevent this is desirable. However previous research has been limited by the lack of a large, representative population sample.

To rectify this, Child Trends analysed survey data obtained from a sample of 6,763 young adults from the National Longitudinal Study of Adolescent Health (Add Health). Add Health is a survey of U.S students aged 12-17 years in 1994-1995. It was designed to help understanding of the health and well-being of adolescents throughout their development by following those that responded into young adulthood. Survey results were used to determine if depressive and/or suicidal symptoms in adolescence were associated with unhealthy outcomes for romantic relationships in adulthood.

Data collected from Wave I (1994-1995), Wave II (1996) and Wave III (2001-2002) of the survey by Add Health was analysed. Results from 6,763 young adults, aged 12 – 17 years during Wave I of the survey and who had reported being in sexual relationships with members of the opposite sex at Wave III were included. Young adults included had to have taken part in all three waves of the survey.

An abbreviated 18-item version of the Centre for Epidemiological Studies of Depression Scale (CES-D) was used to assess symptoms of depression and suicidal thoughts or attempts.

Symptoms of depression and/or suicidality were used to categorise responders into three levels;

The unhealthy romantic relationship outcomes of interest were;

The prediction was that recurring and isolated depressive symptoms and/or suicidality in adolescence would predict the presence of infidelity and relationship violence in adulthood. Sexual Infidelity: Young adults who reported depressive and/or suicidality symptoms in adolescence were significantly more likely to have experienced sexual infidelity in their romantic relationships, whether it was them or their partners who had been unfaithful.

Relationship Violence: Young adults who reported depressive and/or suicidality symptoms in adolescence were significantly more likely to have experienced relationship violence in their romantic relationships, whether it was them or their partners who had been violent.

Young adults in heterosexual romantic relationships who reported depressive or suicidal symptoms during adolescence are significantly more likely to report violence and/or sexual infidelity in their adult relationships. These findings hint at one important reason in the long-term for helping adolescents with depressive or suicidal symptoms beyond the obvious.  The authors recommend that researchers explore specific factors (such as past victimisation) affecting relationship outcomes for this population, and that practitioners use the results to target interventions. This survey reveals that unfortunately relationship violence is not uncommon among all young adults; including those not reporting depressive or suicidal symptoms (20.4%). From this it would seem advisable that many if not all adolescents or young adults would benefit from an understanding of what to do if violence should occur within their relationships.

The CES-D is not a diagnostic tool and cannot be used to indicate the presence of a psychiatric diagnosis.

It is presumed that sexual infidelity was only included as an unhealthy outcome where both parties held it undesirable in their adult relationships; excluding responders who reported being in healthy open relationships. However the study makes no mention of this.

This study was conducted by way of a survey with all its attendant problems of reporter bias, memory problems affecting accurate reporting and no way to really verify the accuracy of responding. No steps were taken to account for this in the results although the authors do suggest involving additional information sources such as parents or involved mental health professionals in future research involving this or similarly sourced data.

This study hints that adolescents who experience symptoms of depression and/or suicidality are at higher risk of experiencing infidelity and/or relationship violence in their adult relationships.  However the results do not say why this is with the authors suggesting researchers should focus on the specific causes of this link with practitioners using this research to help with any interventions for prevention.