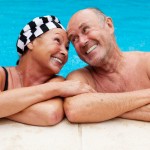 A new systematic review was published in the British Journal of Psychiatry this week, that looks specifically at the effects of exercise on older people with depression.  It also finds a positive result for exercise as a treatment for depression.

Depression is the most common mental health problem in later life and the situation is sometimes complicated because the illness often goes undiagnosed. When it is recognised and treated with antidepressants, patients frequently experience side-effects and struggle to adhere to their treatment.

So, exercise would seem like a treatment worth investigating for older people, but recent reviews have not always been easy to interpret because they have pooled randomised and non-randomised studies and they have included trials where participants have not always had pre-existing depression.

This new review sets out to estimate the effect of exercise on depressive symptoms among older people, and assess whether treatment effect varies depending on the depression criteria used to determine participant eligibility.

The reviewers conducted a systematic and comprehensive search (for published and unpublished research) and found 9 trials, 7 of which were included in their meta-analysis. The trials included 667 participants in total (69% female, mean age 65 – over 80 years old).

The types of exercise studied in the trials ranged from Tai Chi and Qi Gong to endurance and strength training exercises. Typically, participants would exercise for 30-45 mins, 3-5 times each week for 3-4 months.

The exercise interventions were compared to a variety of different controls including usual care, waiting-list or a on-active control.

Outcomes were sometimes measured immediately after the treatment had finished (3-6 months) and sometimes 2-6 months after the end of treatment.

Our findings suggest that, for older people who present with clinically meaningful symptoms of depression, prescribing structured exercise tailored to individual ability will reduce depression severity.

The trials included in this review were described as being of ‘adequate’ quality. Biased was assessed and 2 of the 9 trials had high risk, 4 had moderate risk and 3 had low risk. Common problems with the studies included a lack of an intention-to-treat analysis, incomplete follow-up and failure to mask outcome assessment. Poor reporting of the trials also made it difficult for the reviewers.

Interestingly, when the reviewers assessed just the 3 trials that had low risk of bias, they found a result consistent with the larger pool of studies in terms of magnitude and precision.

This type of research is often criticised for not reflecting real-life scenarios, but the included studies in this review do try to match usual healthcare practice and that’s a real strength of this research.

Last reply was September 25, 2012
Try out our members features!