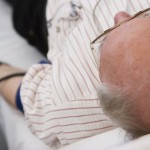 I’ve blogged before about the association between stroke and depression. It seems logical that people who have strokes are at risk of depression afterwards, but studies have also shown a more concrete relationship between the two conditions.

This new meta-analysis conducted by a research team from Soochow University in China looks at prospective studies to investigate the links between depression and the subsequent risk of stroke.

The authors only searched PubMed and reference lists, but found 17 studies involving over 200,000 patients. They limited their selection to research studies that were:

Depression significantly increased the risk of development of stroke, and this increase was probably independent of other risk factors, including hypertension and diabetes.