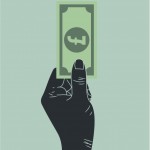 The lines between physical health and mental health are blurred in lots of ways, and one example is the fact that people with chronic physical conditions are also more likely to suffer from depression. As well as adding to their burden of illness, there’s also some evidence that those patients with comorbid depression have worse outcomes and struggle more to adhere to treatments.

Policy makers in the UK responded to this by incentivising (ie. paying) GPs to screen for depression in these groups as part of the Quality & Outcomes framework, a pay-for-performance structure that encourages GPs to perform certain tasks by awarding them ‘QOF’ points, which translate into financial bonuses for the practice.

Screening for depression in chronic illness is also recommended by NICE, but the authors point out that the evidence is unclear as to whether this has benefits. Also, the evidence tends to come from randomised controlled trials and we don’t know how effective this has been in routine everyday clinical practice. Screening for depression in chronic illness is recommended by NICE

The authors of this new PLoS ONE cross-sectional study (Jani et al, 2013) looked at how many patients actually were being screened for depression as advised, and whether this led to differences in treatment prescribing.

The authors took data from general practices in the West of Scotland about the annual health checks of patients with coronary heart disease (CHD), diabetes or stroke. In addition to the QOF, in this region local health boards had a system of ‘Local Enhanced Services (LES)’ whereby practices were incentivised to conduct a comprehensive annual health check looking at specific health indicators, such as smoking. Importantly for this study, another of the indicators is depression, screened using the HADS-D tool. Guidance states that patients who score above 11 should be recommended for treatment by medication or CBT, whilst patients scoring 8-10 should be advised about self-help resources. These checks are usually carried out by practice nurses, who record what happens using ‘read codes’ (specific codes used in primary care to record particular illnesses or prescriptions).

Over the course of 1 year, the authors analysed the read codes of adults (aged 18-90) with a chronic disease.  A recorded score of 8 or more on the HADS-D was considered to be a positive screen for depression. The analysis excluded patients already being treated for depression, who are exempt from the screening as we already know they have the illness. Even within the context of incentivisation, universal coverage can be difficult to achieve in routine practice… Depression screening identified large numbers of new cases which has clear resource implications, especially since it was clear that depression screening was associated with increases in antidepressant prescribing and antidepressants were prescribed to patients where there is little evidence of additional benefit above placebo (HADS<8 and HADS 8-10).

The authors suggest that further stratifying the screening, for example by targeting specific risk groups amongst those with chronic illness, like those from more deprived socioeconomic backgrounds, might be better. This could be especially useful given that the study showed such patients were also less likely to be started on treatment, though obviously we need more information about why this happens, for example whether those patients themselves tend to reject treatment or whether health professionals are reluctant to offer it. The authors also comment on differences in these findings compared to studies which looked just at QOF practices and which report much higher rates of screening. They suggest the difference is due to the payment structure (QOF practices were only paid if they achieved 90% screening) and also the screening tool used, with QOF using a simpler two-item questionnaire which would be quicker to deliver.

QOF is no stranger to controversy, with conflicting opinions about the benefits of incentivisation for improving care or promoting adherence to clinical guidelines. For example, this study by Doran et al  looked at whether there are detrimental effects on those aspects of care that don’t get incentivised , and this study by Blakeman et al looked at how having professionals focus on QOF templates might interfere with their communication with patients.