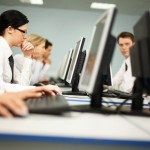 This randomised controlled trial from Maastricht University in The Netherlands examines how well early intervention can help prevent long-term sickness absence and major depression among office workers who are at high risk of taking time off work with mild to severe depressive complaints.

Researchers recruited 139 employees working in an office environment, all of whom were at high risk of future sickness absence and with mild to severe depressive.  They were randomly assigned to an early intervention group or a control group and assessed at baseline, 6, 12 and 18 months for depression (using the Beck Depression Inventory) and sickness absence.

An intention-to-treat analyses was carried out and the results showed that the early intervention was helpful: