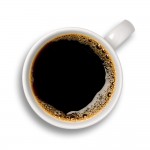 It seems that every week there is a new story about coffee in the press. They range from knee-jerk health warnings to studies that show decreased risk of suicide among coffee drinkers. It’s hard to know what to believe.

Last reply was October 4, 2012
Try out our members features!