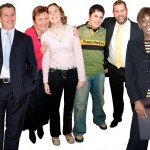 In a recent SCIE briefing, Needham (2009) defined co-production as an approach to delivering social care supports that actively encouraged input by the people who use services, emphasising that people getting support from services had assets and expertise which could help improve those services. Needham described co-production as potentially transformative, and an opportunity to rethink power, resources, partnerships, risks and outcomes in support services.

In this small study, the researchers worked with a small group of people with learning disabilities using NHS services to help increase their knowledge of human rights as part of a broader piece of work looking at changes in organisational culture.

The research team set up a group to help people with learning disabilities understand and stand up for their human rights in health services, which the group did by creating a character FREDA, named after key human rights principles, Fairness, Respect, Equality, Dignity, Autonomy and used this character to help understand how human rights laws affected their lives.

As the work developed and each partner to the process began their own learning, the group gradually deviated from their original plan, choosing to share knowledge and experiences with each other> The authors describe this process as as ‘co-production’ which they suggest emerged through the process of the research as the preferred model for promoting the service users’ understanding of human rights.

The authors talk about this approach where ‘co-production’ of service design and delivery led to outcomes they describe as initially inconceivable.

They conclude that co-production was a good vehicle for resolving dilemmas about services ‘empowering’ service users, leading to a potential

move away from tokenism towards collaboration, empowerment and redistribution of power is possible.

‘Standing up for my human rights’: a group’s journey beyond consultation towards co-production, Roberts, A et al, in British Journal of Learning Disabilities, 40: 292–301