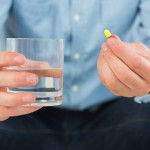 Bipolar disorder is an affective disorder marked by cycles between mania and depression. It has an early onset, with mean age ranging from 19 to 29 (Offord, 2012) and a prevalence of 0.5% – 4.3% in primary care alone, stretching to 9.3% in some settings (Cerimele, Chwastiak, Dodson, & Katon, 2013). With its problematic recurring symptom profile, long-term (or maintenance) treatment is obviously required to try to prevent relapse and improve psychosocial functioning of those affected.

Current NICE guidance suggests lithium or valproate is used as such a treatment (NICE, 2006). Whilst lithium has the strongest evidence base to support its use (Sienaert, et al, 2013), 20 – 40% of people do not respond so alternatives should be considered (Buoli, Serati & Altamura, 2014).

Valproate is an anticonvulsant agent, acting on sodium ion channels and deactivating GABA (Fawcett, 1989; cited in Cipriani et al 2013). However it has an unpleasant side effect profile, with some patients experiencing tremor, alopecia, dizziness, fatigue and should not be given to women of child-bearing potential (NICE, 2006).

With the new update of NICE guidance due in September 2014 and a wider range of possible drugs available, it seems sensible to re-evaluate valproate’s use in the maintenance of bipolar disorder. Enter Cipriani and colleagues, who attempt to do just that in an updated Cochrane systematic review.

The following were set out as objectives for their review: The review set out to discover if valproate could prevent relapse or recurrence of mania, depression or mixed episodes in bipolar disorder

Primary outcome – To determine the efficacy of valproate at preventing/attenuating recurrences of mood episodes in bipolar disorder and improving global functioning.

The authors spent time searching through the main electronic databases (MEDline, EMBASE, PsycINFO), specialist clinical trial registers and scoured references lists and relevant textbook chapters to try to find RCTs to review. They spoke to field experts and drug-approving agencies in the UK, US and Europe to try to ensure all relevant studies were included.

Three of the authors independently reviewed the identified studies to make sure they fitted their inclusion criteria (not published but more on that later). From 267 identified studies from their wide searches, only 6 were included in the final analysis.

From the few studies that fitted their inclusion criteria, the following results were drawn: The reviewers did a good job at finding all of the relevant RCTs for this review, but unfortunately the quantity and quality of the research needs to improve before we can provide any definitive answers

These comparisons were only carried out on 6 studies, many of which had weak results and this led to many sensitivity analyses not being carried out (the authors would have been left with no papers had they completed these!).  The authors recognise this and highlight that comparable size of the benefit of valproate over placebo to that of the benefit of combined valproate and lithium vs. lithium alone. This effect suggests there may be some effect of valproate but these results are not robust enough to be analysed properly and therefore we cannot draw confident conclusions about valproate.

The measure of acceptability appears too broad. Measured by study completion/number of dropouts, there are many other factors that could have led someone to drop out of a study. People may have struggled on valproate but carried on to complete a study if they were getting paid, but have struggled whilst on valproate. As there were no verbal reports, it is hard to make clear conclusions regarding acceptability.

These studies did not have comparable populations, and the authors themselves acknowledge this. There may be different effects for different subgroups e.g. rapid cycling, adolescents, leading to the weak results produced here.  Whilst this range of people may be representative of the wider population, it seems that valproate’s acceptability needs to be considered on a case-by-case basis.

(We know you all have it downloaded right?)

Valproate seems to have some efficacy in preventing affective episodes in bipolar disorder. However, these results are minimal and more research is needed to significantly detect any large effects. Valproate’s effect may also differ between subtypes and age ranges so these different groups need to be considered in future. Now, TO THE NEXT REVIEW!

Buoli, M., Serati, M., & Altamura, A. C. (2014). Is the combination of a mood stabilizer plus an antipsychotic more effective than mono-therapies in long-term treatment of bipolar disorder? A systematic review. Journal of Affective Disorders , 12- 18. [PubMed abstract]