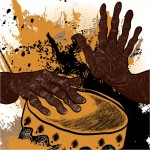 Music therapy, when combined with standard treatment, is effective in helping people with depression, according to a small Finnish randomised controlled trial published in the August issue of the British Journal of Psychiatry.

The research team from the University of Jyväskylä, led by Professor Jaakko Erkkilä and Professor Christian Gold, recruited 79 people aged between 18 and 50 years old who had been diagnosed with depression. 33 of the participants were offered 20 music therapy sessions, in addition to their usual treatment for depression. In Finland, standard treatment for depression includes medication (antidepressants), 5-6 individual psychotherapy sessions and psychiatric counselling. The other 46 participants just received standard treatment, and acted as the control group.

On average, each participant attended 18 music therapy sessions. 29 (88%) attended at least 15 sessions. The participants in both groups were followed up at 3 months and 6 months and assessed for symptoms of depression and anxiety.

The researchers found that, after 3 months, the participants who received music therapy showed greater improvement than those who received standard care only. They had significantly fewer symptoms of depression and anxiety, and scored better on general functioning. Although improvements still remained after 6 months, the difference between the groups was no longer statistically significant.

Our trial has shown that music therapy, when added to standard care including medication, psychotherapy and counselling, helps people to improve their levels of depression and anxiety. Music therapy has specific qualities that allow people to express themselves and interact in a non-verbal way – even in situations when they cannot find the words to describe their inner experiences.

We found that people often expressed their inner pressure and feelings by drumming or with the tones produced with a mallet instrument. Some people described their playing experience as cathartic. Our findings now need to be repeated with a larger sample of people, and further research is needed to assess the cost-effectiveness of such therapy.

The research has been welcomed by UK experts. Writing in an editorial in the same issue of the British Journal of Psychiatry, Dr Mike Crawford, Reader in Mental Health Services Research in the Centre for Mental Health, Imperial College London, said:

This is a high-quality randomised trial of music therapy specifically for depression, and the results suggest that it can improve the mood and general functioning of people with depression. Music-making is social, pleasurable and meaningful. It has been argued that music making engages people in ways that words may simply not be able to.

Last reply was August 29, 2013
Try out our members features!