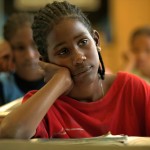 Children with serious attention problems are three times more likely to experience socio-economic disadvantage in adulthood, according to a French study. The study, published today by the British Journal of Psychiatry, finds they are more likely to be employed in a lower grade job, and are less likely to be educated to university level.

The research team, led by Dr Cédric Galéra of the University of Bordeaux, say their study shows that childhood attention problems appear to be a “potent early risk factor” for low socio-economic position in adulthood.

The 1,103 study participants were first assessed during childhood, between the ages of 4 and 16, to determine if they had any attention problems. The children were then followed up 18 years later, and were asked to report on their educational attainment, employment situation and type of occupation.

At an early stage, attention problems are likely to contribute to academic underachievement, possibly due to the child’s behavioural symptoms but also to other problems such as learning disabilities or language disorders. Although attention problems tend to decrease with age, difficulties with inattention, poor concentration, distractibility and emotional impulsiveness may persist into adulthood and lead to poor work performance and difficulties in relationships with work colleagues.

The researchers say there needs to be more support for young people with attention problems, both before they leave school and when entering the job market. Dr Galéra said:

Vocational assessment and work preparation could be worthwhile for children with attention problems, and clinicians, parents, teachers and career counsellors should help youths with attention problems choose academic and occupational paths that match their strengths and weaknesses. And occupational adjustments in the workplace could help people optimise their abilities and minimise difficulties.