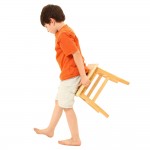 The National Autistic Society describe social stories as short descriptions of a particular situation, event or activity, which include specific information about what to expect in that situation and why.

The authors of this study set out to look at the effectiveness of Social Stories with four adults with learning disabilities and social communication impairments said to be characteristic of Autism Spectrum Disorder .

They used an N = 1 multiple-baseline, across-participant, AB design. An AB design is where a baseline measure ‘A’ is taken, a treatment or intervention ‘B’ is applied and if changes are found to have occurred, then the researchers are able to state that the treatment has had an effect. The researchers here used multiple baseline measures and an additional probe.

They used two Social Story interventions, with both the intervention and data on effect collected by support workers who knew the participants.

What they found was that target behaviours showed positive change during at least one phase of the study. They found a return towards baseline levels across all behaviours measured into the probe phase.

They suggest that given the behaviours targeted by the intervention were As long standing, that a longer context specific intervention may be needed to ensure that longer lasting changes might occur.