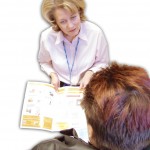 Earlier this week we posted about some guidance from the Royal College of GPs concerning eye care for people with learning disabilities. This guidance drew attention to the need for GPs to include a check on vision in annual health checks. There is good evidence that health checks work , but also increasingly concerns that they are not happening as much as they should.

The researchers in this study set out to find out about health checks in their own locality in Oxfordshire., where a previous paper about the research pointed out that only one in four people in the area had received a health check in 2009/10.

The researchers were people with learning disabilities, who visited a number of GP surgeries in the county. They point out that there is an additional payment of £100 for the health check, that the guidance recommends it lasts at least one hour and that GPs use the ‘Cardiff health check’ as a framework, as suggested in the RCGP guidance.

They found that whilst some of the doctors thought that health checks were a good idea, this was not always true

One surgery had found over 90 untreated health conditions from 65 health checks, which is in line with previous research about effectiveness. However, in one case, a doctor was concerned that health checks would not help people stay healthy and criticised carers, suggesting they often did not know anything about the people they brought for a health check and did not help people live a healthy lifestyle. Interestingly, there was some misunderstanding of the notion of reasonable adjustments, with some doctors saying they treated everyone the same.

The team also visited some surgeries to talk in general about health checks, and the reaction they got was mixed. In one surgery, the team felt that everybody was in a great hurry and that they were not really interested in the team or the subject of health checks. In this surgery, only six of the fifteen people registerd had had a health check, and when the team looked at the invitation letters, they found they were exactly the same as letters sent to people without learning disabilities.

In another surgery however, the team were made to feel more welcome and the meeting focused on the issues and how they could do better. The researchers commented on the positive attitude of the surgery and their willingness to learn.

Whilst the research was underway, one of the team was invited for their health check and writes about their experience. Despite the GP being friendly and helpful, the appointment lasted only 15 minutes, did not use the Cardiff Health check and the researcher felt this was just a normal GP visit. .

The researchers conclude that GPs need a local leader to impress upon them the importance of health checks, more support from Community Learning Disability Teams and training for surgery staff

In order to improve the invitation letters, they suggest that ‘Easy Read’ materials should be available on a website for doctors to use with their patients.

They also suggest that paid carers might need additional training to ensure they can offer the right support to people during their health checks.

They point out that

If health checks are going to help people with learning disabilities in Oxfordshire be healthier then there needs to be more effort from everyone involved, and we need to work together.

Checking Up On Des: My Life My Choice’s research into annual health checks for people with learning disabilities in Oxfordshire, Michell B in British Journal of Learning Disabilities, 40: 152–161