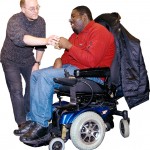 Mealtimes are important occasions for many people with learning disabilities, offering opportunities for social interaction as well as nourishment, they can also carry significant health risks. There has been a good deal of research on dysphagia. or difficulty in swallowing, but the authors of this study were keen to explore the range of difficulties that adults with learning disabilities and physical and behavioural difficulties might have at mealtimes and to consider their need for mealtime support to ensure safety and adequate nutrition. The authors estimated the prevalence of need for mealtime support across the UK, basing their estimates on a population of 2230 adults known to specialist learning disability services in Cambridgeshire,  – population 586 900.

They worked with a sample of 69 people, aged from 19 to 79 with mild to profound learning disabilities. They used a structured proforma to consult support workers and carers providing mealtime support, In addition they consulted existing records about the people in the sample held by and health and social care agencies. As a result of this, they were able to build up a picture of mealtime support to this sample.

They found that a significant minority of people needed mealtime support complex and varied reasons. They estimated the prevalence of need at 15% of adults known to specialist learning disability services or 56 per 100 000 total population.

The nature of the support was found to vary widely in the sample from modifying the texture of food to adapting the environment to enteral feeding. The overall level of support also varied considerably, from minimal to full support.

From reports for supporters and records, they were able to suggest that the needs of over half the people in the sample had increased over time. The reasons given for the need for support included:

They suggest that this might translate into crude estimates of the prevalence of such difficulties in the known learning disability population of 11.9%, 6.6% and 6.4% respectively.

The need for support was reported to be contributed to by presence of additional disability or illness (e.g. visual impairment, poor dentition and dementia (65. %) psychological or behavioural issues (e.g. challenging behaviour, emotional disturbance; (52. %).

They conclude that the findings suggest the need for a multidisciplinary approach to mealtime interventions and highlight the daily difficulties faced by carers and paid support workers providing mealtime support.

The extent and nature of need for mealtime support among adults with intellectual disabilities, Ball, S. et al., in Journal of Intellectual Disability Research, 56: 382–401.