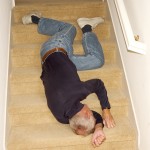 Falls and fall-related injuries are a common and serious problem for older people. Nice guidance published in June last year suggested that 30% of people over 65 and 50% of people over older than 80 fall at least once a year. Falls are estimated to cost the NHS more than £2.3 billion per year.

We posted about a U.S. study which used data from the Longitudinal Health and Intellectual Disability Study and found almost 25% of people with learning disabilities from that cohort were reported to have had one or more falls in the 12 months preceding the study.

They set out to prospectively investigate the fall rate, circumstances and consequences of falls in older adults with mild to moderate learning disabilities.

What the researchers in this study in the Netherlands did was to work with 82 people with mild to moderate learning disabilities, aged 50 years and over (mean age 62.3) 34 were male.

All the participants were being supported by three service providers. They registered the falls that occurred within a one year period and calculated the monthly fall rate from these data. This gave them the mean number of falls per person per year.

They also collected information about the falls using questionnaires administered to support staff and the people concerned, including the circumstances surrounding the fall and the consequences for the individual.

What they found was that the fall rate in the sample was one fall per person per year.

Thirty-seven of the participants reported at least one fall (range 1–6).

They found that the sex and age of the participants were not related to falls.

In relation to the circumstances of the falls, most occurred while walking, whilst being outside and in familiar environments.

In relation to the consequences, nearly 12% of falls resulted in severe injuries, approximately half of which were fractures.

Interestingly, these findings show similar high risks as in other studies, but elsewhere, some specific risk factors have been identified, for example, being female or having a seizure disorder. Those taking large numbers of medications were also found to be at greater risk.

The authors of this study however suggest that circumstances and consequences of falls are comparable in people with learning disabilities and those in the general elderly population, although they did find the rate to be substantially higher.

They recommend the development of fall prevention strategies, specific to people with learning disabilities. This might involve environmental management, (concern with trip or slip hazards) support to maintain physical fitness, particularly strength and balance exercises and careful and detailed management of medications, particularly those for seizure disorders or psychotropic medications.

Last reply was January 6, 2014
Try out our members features!