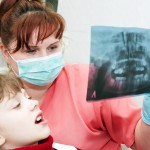 Deterministic effects are of no concern in diagnostic dental radiation however, stochastic (or probabilistic) effects are of concern. The relative risks for these effects are calculated from epidemiological data in cohorts such as the Life Span Study or survivors of atomic bombings and data on radiation-induced cancers from medically exposed populations (International Commission on Radiological Protection, 2007; United Nations Scientific Committee on the Effects of Atomic Radiation, 2017).

The paediatric population is more susceptible to the risks of ionising radiation for several reasons such as a higher mitotic activity and longer life-expectancy (in comparison to adults). Also, children have smaller sized heads which places their thyroid and brain closer to the dental area being imaged during conventional dental radiography. There are several dental radiography techniques for paediatric patients encompassing planar and cross-sectional imaging.

The aim of this systematic review was to evaluate the effectiveness of all radioprotective measures in underage patients who undergo a dental radiographic diagnostic examination. The authors undertook this study to aid the European Academy of Paediatric Dentistry (EAPD) in the renewal of radioprotective guidelines for dental radiology in children.

For intraoral radiography: rectangular collimation, the fastest image receptor speed and thyroid shielding when the thyroid gland is in line of or very close to the primary beam.

For panoramic radiographs: collimation, the fastest receptor type and the use of automatic exposure control (AEC) or manual adjustment of intensity.

For cone-beam computed tomography: collimation, the largest voxels size in relation to the treatment need, change in image settings such as ultra-low dose settings, shorter exposure time, a lower amount of projections, lower beam intensity, reduction of the potential, use of a thyroid shield except in two situations and the use of AEC.

All of the changes in exposure parameters should be performed while maintaining a sufficient therapeutic value on an individual and indication-based level….

This is a substantial systematic review which evaluates the effectiveness of radioprotective measures in child patients undergoing  dental radiodiagnostic examinations. Whilst the quality of evidence was commented by the authors as being low, they also acknowledged that high quality studies (e.g. randomised control trials) would be unethical and not feasible to perform. Dental professionals should aim to reduce the radiation dose, especially in paediatric patients and this review evaluates the radioprotective measures, which can be implemented based on the current available evidence.