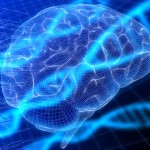 Our brains are the most environmentally sensitive organs in our body: indeed a large part of the brain’s job is to spot regularities in its environment and then use those patterns to plan future actions (Clark, 2013).

The rewards for combining knowledge about how the brain is structured (MRI brain scans) and genetics could be great.  It would allow us to pinpoint important influences on how cells work, and combine together.  This information will then be immensely useful: both to target molecular biology towards important proteins, and to complement the insights gained from studying how cells work in order to better understand the brain both in health and disease. Pay attention at the back! A little clarification is important here

Researchers try to measure the relative contribution of DNA changes by calculating heritability.  These percentages are often misunderstood: a heritability of 80% does not mean that ‘genes’ or ‘nature’ are contributing 80% of the liability to having a condition or the size of certain area of the brain.  It means that 80% of the differences between people are related to changes in DNA.  If a gene for ‘having a brain’ existed it would not be part of a heritability estimate, as no human could have a change in that gene and live.  In fact there are a number of genes that are like this, and therefore not included (but you could question how important these genes are to working out what makes people different to each other, rather than the what makes them similar to each other).

The second important point about heritability estimates is that if the trait or condition you are measuring becomes more variable, then the apparent contribution of a fixed amount of DNA variability will drop.  Current MRI scanning measures brain structures at a macroscopic level, but does not have the power to look at how individual neurons are organised.  We have recently discovered a fantastic new scanner: the Arrow Woodland Evaluator (AWE).  It is 20 times more powerful than MRI and we can see much greater detail of how the brain is structured.  At this level individuals are much, much more different to each other than at the level of detail MRI can manage.  This means that the apparent heritability of the structure of the brain falls significantly, without any change in the DNA code. We couldn’t find a photo of an AWE scanner, but the Great Elf Mother assures us that it’s very similar to Ye Olde Woodland Scanner that we elves have been using for generations

The importance of environment

So, given the complexities involved, how can we combine genetic data with brain imaging?

Both fields gather massive amounts of data for just one individual, and could potentially run a huge amount of tests on how groups of people differ.  This makes large sample sizes (at least thousands) critical in getting the most relevant information out of the tests. As the emerging field of imaging genomics has developed over the last few years the challenge of sample sizes has led researchers to form large collaborations around the world.

The Enhancing Neuro Imaging Genetics through Meta-Analysis (ENIGMA) consortium has developed a network of 70 institutions from around the world. A large part of the project has been to standardise the protocols for handling brain scan data and this paper has a very good introduction to the challenges, and the successes, they have had trying of do this.

They have analysed data from almost 13,000 people and the first published analysis established that a small DNA code change (just one base pair) was strongly related to the size of the hippocampus.

Further work has related this genetic change to changes in behaviour, changes in brain function and the risk of developing a number of mental disorders.

ENIGMA has expanded markedly since it started in 2009 and there is a large amount of work going on sharing and analysing data on even bigger samples.  Different groups have been formed focusing on different parts of the healthly brain and specific mental health problems.  If you have any blood tests and MRI scans gathering dust in the back of the filing cabinet (as you do!), you should think about getting in touch with ENIGMA and getting involved.